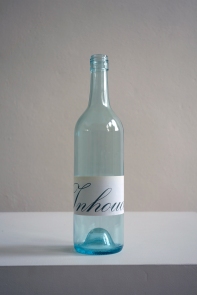 His sculptures appear to have been created out of chance finds. However, that is not to say that Marcel Prins leaves anything to chance.
His work is composed of parts which rub against each other and parts which strongly oppose each other, forcing the viewer to hop from one leg to the other.

What the viewer is left with is a feeling of surprise or even a joke. However, there is more to it than just a joke. For the demanding viewer, there is a new perspective, an insight – you can see it in this way. Take for example a couple of shapes which were once meant to be the legs of a small table, put them in a bunch upside down, give them a colour which one normally associates with poison and the table legs are no longer table legs. Together they have taken on a new shape and a new meaning. The viewer is compelled to look closely because he directly recognizes something which cannot be immediately named.
Looking at one of Marcel Prins’s sculptures requires slowly unveiling it with the senses. There is something which first catches the eye and almost immediately something else cries out for attention and then something else begs to be seen. The parts communicate with each other and appear to say “Look, figure me out”. At this moment something else will appear and call upon new sensations and connotations. 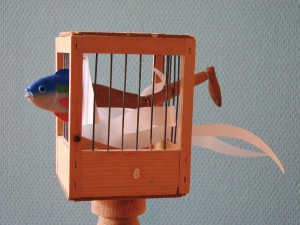 Marcel Prins calls himself disparagingly a “binder of sculptures” or an “joiner of sculptures”. Any material, any shape, any colour can be used and then again not. He is not fussy, rather selective. He says that his eye is attracted to shapes and lines which he himself could or would have made. He asks himself what does it store inside itself?

It can be the pale dried root of a vine or a curl of steel which was once part of a useful object which has taken on an all-embracing shape of its own, resembling a snail’s shell laden with symbolism. At the same time, the shape remains open since it can be looked through. The steel has rusted, the curl has been deformed and its elegance has long gone. Set in a new context, both the form and material take on new meanings inducing new associations.

Wood, bone, metal, stone, feathers, anything which has a shape, can all be used by Marcel. The starting point for a new piece is frequently a shape or a found object. New objects can be created in a variety of different ways. Items lying around the house are combined with found objects, or the inverse: found objects are combined with something which Marcel already had at home; a stone with a hole in it, a curled sheet of metal, a rusting piece of iron, a block of wood with a grooved pattern. It is not necessary to look deliberately for something, the material finds Marcel by chance.

Of course, some of the works are commissions. The starting point remains the same. Conflicts are brought into harmony with each other. The work may not be heavy, it may un-settle the viewer or it may force the viewer to look and invite associations and interpretations.

If Duchamp had been a bit more generous with his not insubstantial sense of humor, his readymades might have looked a bit more like those of Marcel Prins.
If Brancusi had had a sense of humor at all, then his totemic combinations of raw materials and potent shapes might have as well. The Dutch artist Prins as- sembles whale bones, wood bits, walking sticks, wire baskets and empty wine cases into sculptures that look and act like naughty descendants of the modern masters. In that, they come by their witty sense of play and excellent sense of form honestly. Prins appreciates a perfect wooden ostrich egg as seriously as anyone, but he has the contemporary gumption to balance it not atop a marble plinth but instead on a shaky stack of oddly shaped timber. As for his sculpture of a cow who has run out of milk, it might just be one of the more inventive uses of a cut-up broom stick, wood floor slats, a chair back, a metal coffee table base and a little stool. Picasso’s bicycle seat bull would have given it a second look. 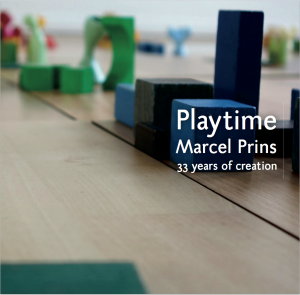